A journey through time

Francesco Illy founded illycaffè in 1933.  His 1935 invention of the illetta, considered the blueprint for modern espresso machines, revolutionized coffee preparation.  His innovative method of packaging, based on pressurization, enabled illy’s initial exports to Sweden and Holland during the 1940s.  Francesco Illy’s method remains the standard for preserving and enhancing coffee’s freshness during transport and storage.

Ernesto, Francesco’s son, earned a doctorate in chemistry and joined the company in the late 1940s.  His passion for learning gave rise to illy’s formal scientific and technological research efforts, starting with an-house laboratory dedicated to coffee chemistry.  In the 1950s, he spear-headed the company expansion into homes, selling smaller cans of ground coffee for the first time. In 1965 he moved the company to its current Via Flavia headquarters, still in Trieste.

In 1974, Dr. Illy furthered the company’s lead in coffee innovation with ESE, the first pre-measured espresso pods, making café-quality espresso simple and easy at home or the bar.  In 1988, he introduced and patented a photo-chromatic means to identify the highest quality beans, one by one, right at the source.

The 1990s saw the creation of the illy Art Collection, a new logo by renowned pop-artist James Rosenquist, and establishment of the Brazil Award recognizing excellence in coffee cultivation. Today, illy is synonymous with premiumItalian coffee in over 140 countries worldwide under the guidance of Ernesto’s son, Andrea Illy, who continues the tradition of innovation and coffee excellence.

Francesco Illy, of Hungarian descent, travels from Vienna to Trieste, the coffee city, at the end of the First World War. In 1933 he founds illycaffè based on a dream: to offer the best coffee in the world. 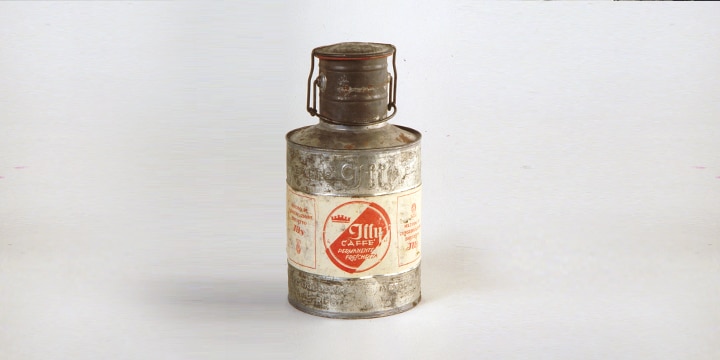 illycaffè patents its revolutionary pressurisation system, which the company still uses today to pack its products: the properly ripened coffee can thus travel worldwide whilst keeping its aroma and freshness. 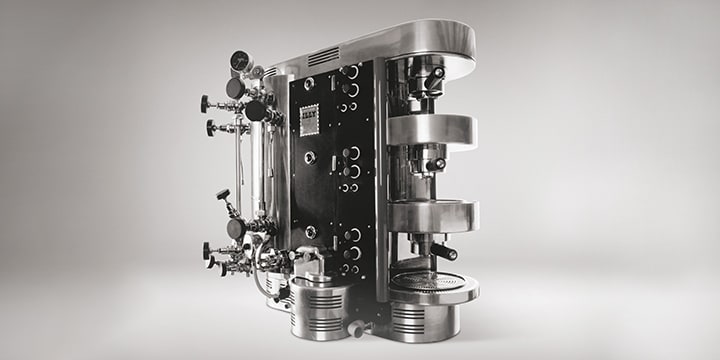 Illetta, the very first modern espresso machine, is created thanks to the patented system of separating water heating and pressure. 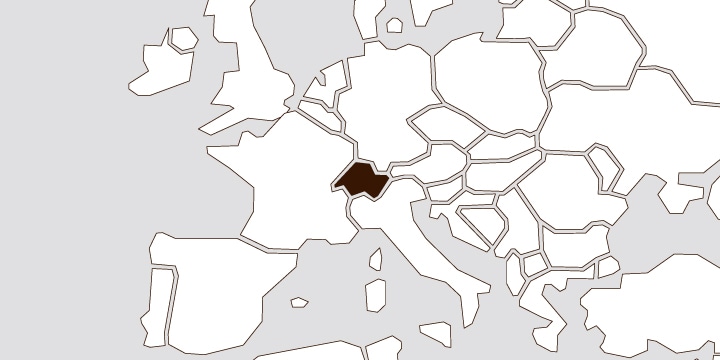 illycaffè becomes the ambassador of espresso culture in Europe and begins exporting through its first foreign base in Switzerland. 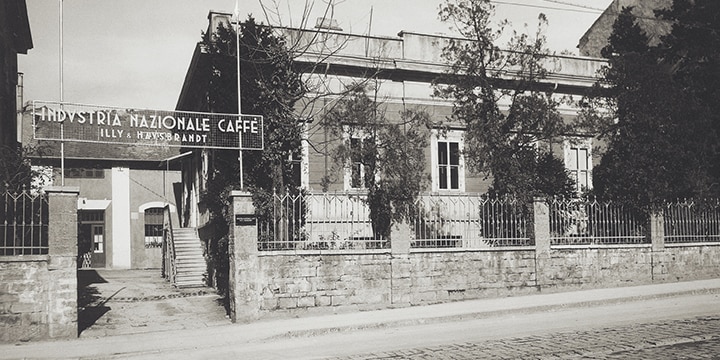 Ernesto Illy, the founder's son, joins the company after gaining a degree in chemistry and sets up the first research laboratory, creating synergies with prestigious international scientific institutions. 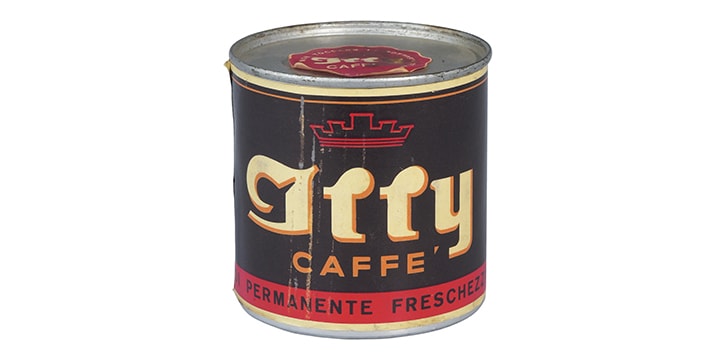 With the new production department, a small cylindrical can filed home use is created ground coffee. 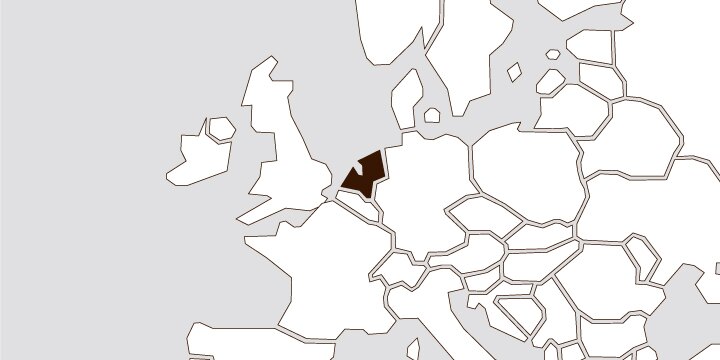 The company reaches northern Europe with its first branch in the Netherlands. 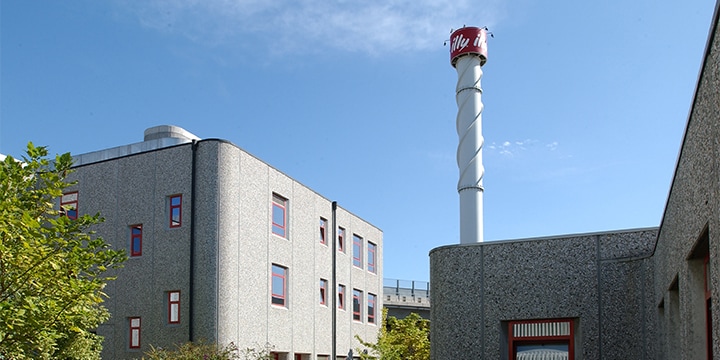 illycaffè moves to its current premises in Via Flavia. The founder's dream continues: Ernesto Illy now focuses on international development. 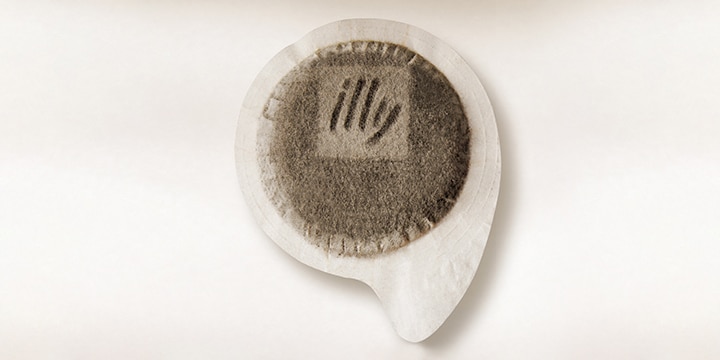 1974
The first single portion on the market

illy is the first company to market coffee pods – single-serve doses of ground, tamped coffee - which make the perfect espresso at any time and in any location: a radical innovation in the history of coffee which will pave the way for illy’s internationalization. 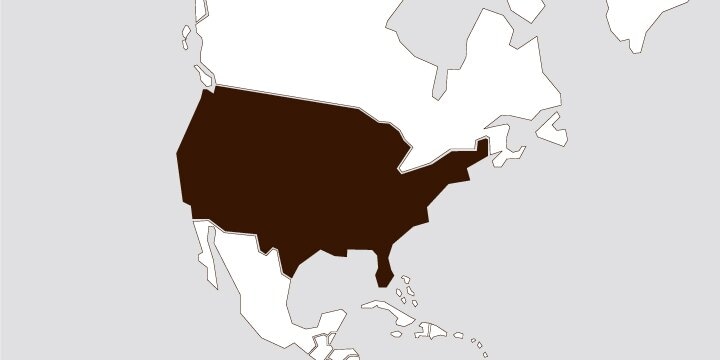 illycaffè arrives in the United States, the first Italian roaster to export espresso culture across the ocean. 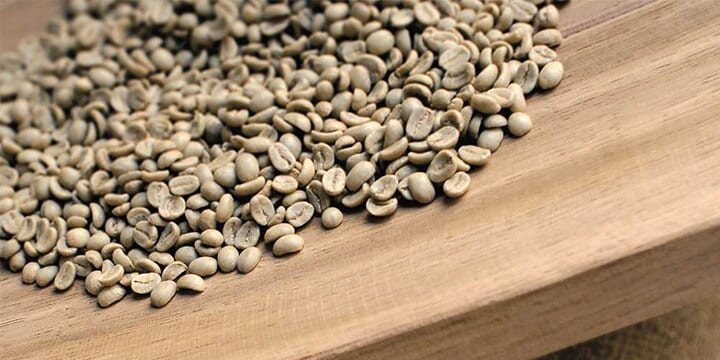 1982
illy quality in each single bean

illycaffè patents the digital sorting machine, which analyses the colour and shape of beans to ensure each one is perfect.

1991
illy a pioneer in selection at origin

The Prêmio Ernesto Illy de Qualidade do Café para Espresso is created, through direct relationships with growers, ensuring the best quality and, thanks to Ernesto Illy and his daughter Anna, transforming coffee production in Brazil. 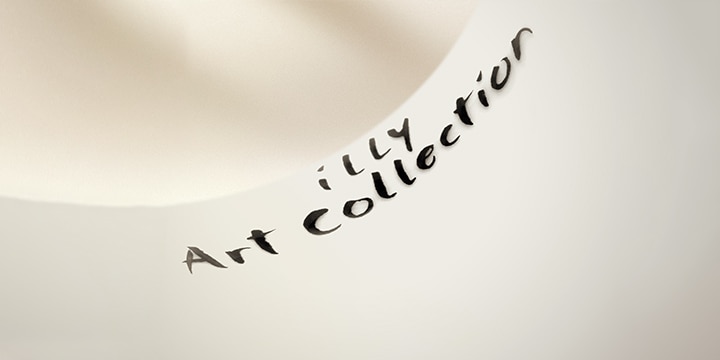 Beauty and goodness: Francesco Illy comes up with the idea of the iconic cup, designed by Matteo Thun. A contemporary interpretation of the centuries old art of decorative porcelain, the illy Art Collection has been added to over the years by consolidated and upcoming artists, becoming the largest collection of art objects in the world. 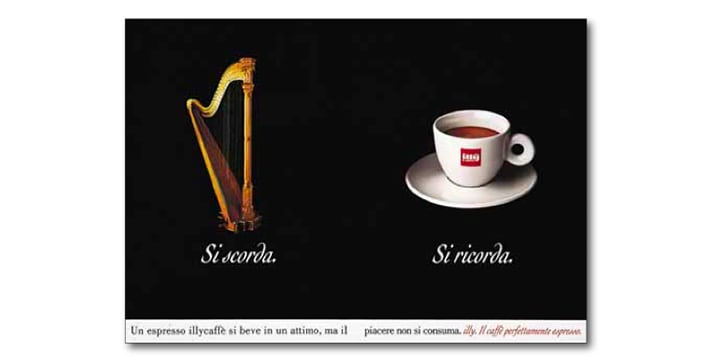 1992
Communication of the unique illy blend

A new advertising campaign focuses on the uniqueness of the illy blend, conceived by Riccardo Illy. 9 origins of the highest quality Arabica coffee to affirm the brand's leadership in bars and at home. 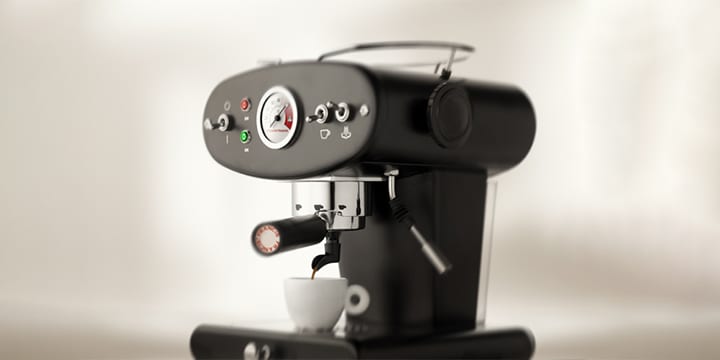 1995
X1: design and technology for espresso

60 years after Illetta, the grandson Francesco Illy sets up Francis Francis! and creates the X1 for home espresso: it is still a style icon today.

1996
James Rosenquist and the new logo 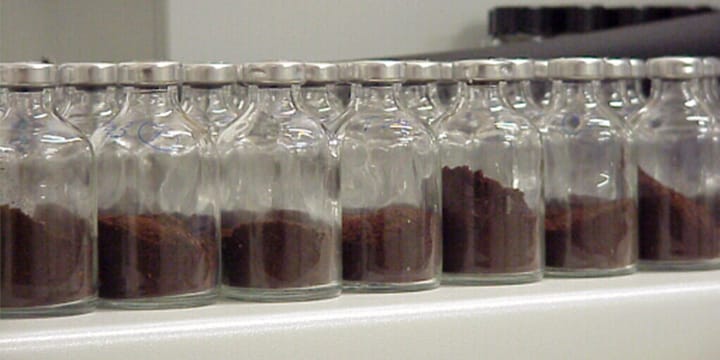 AromaLab launches at Trieste's Science Park Area: a laboratory for studying the single aromas in the unique illy blend.

With a mission to spread coffee culture around the world and share knowledge to improve quality, the University of Coffee covers the entire supply chain, from plant to cup. 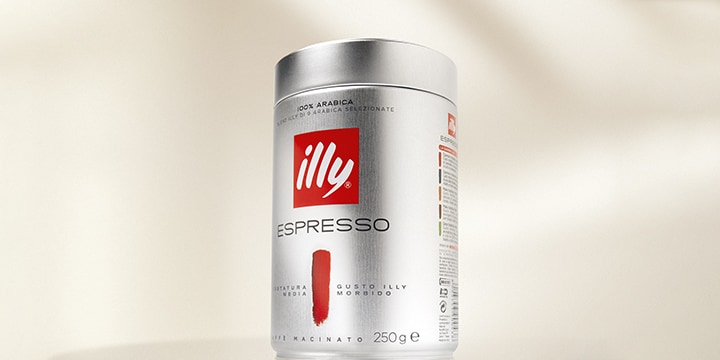 The "250 grams" home can is a miniature version of the one used in bars, immediately becoming an international icon. 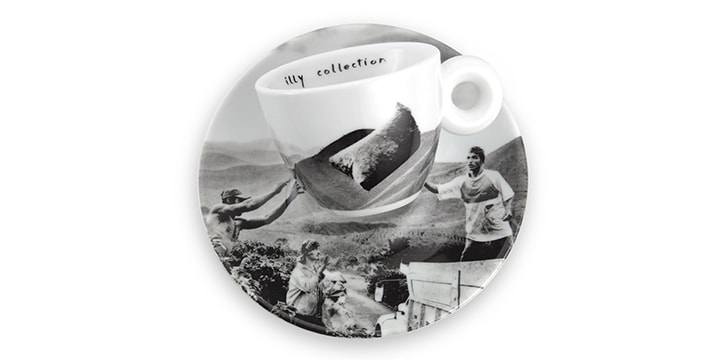 After an encounter with the great photographer Sebastião Salgado comes a journey into the paradise of coffee, to pay homage to the men and women growing it. The project lasts 14 years and travels to 10 countries, culminating in the "Scent of a Dream" exhibition. 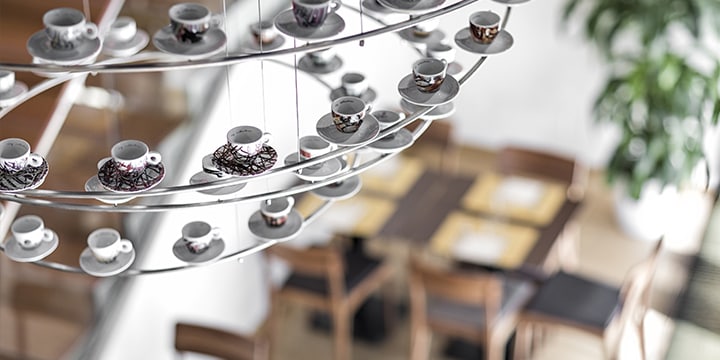 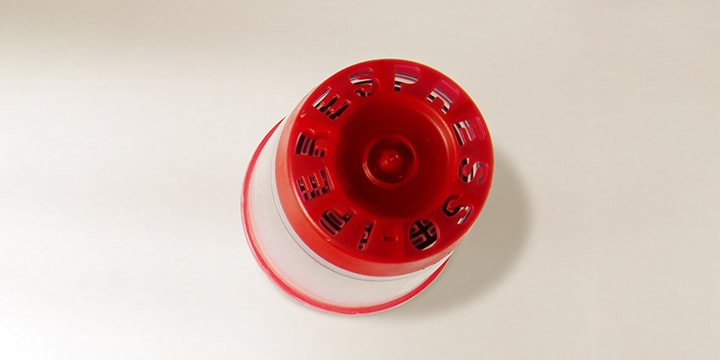 Thanks to the two infusion and emulsion phases, the Iperespresso capsule, covered by 5 international patents, produces a coffee with an intense aroma and velvety consistency. 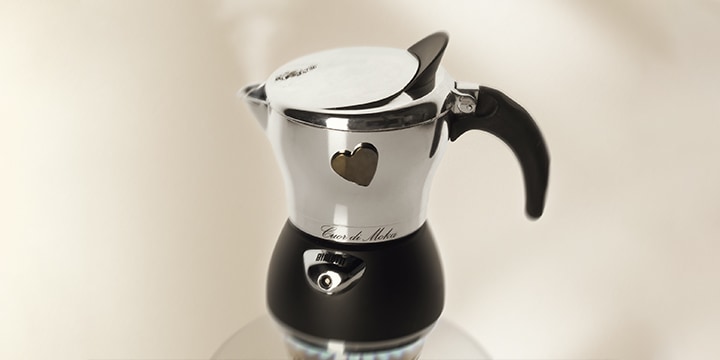 illy research develops illy moka, to improve the organoleptic properties of the Italians' favourite coffee. New grinding and a coffee pot that does not "burn" the coffee. 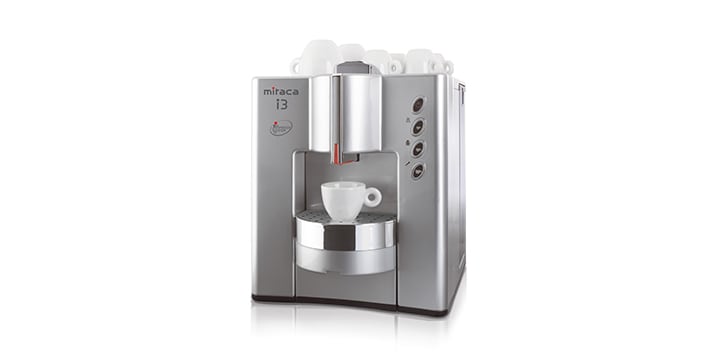 illy entry in the share capital of Mitaca, a specialist in portioned systems for offices. 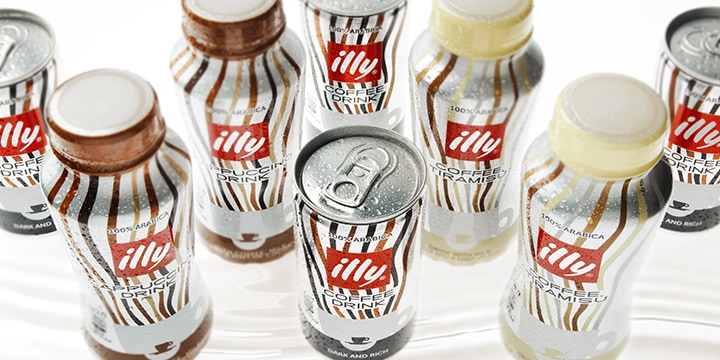 Coca-Cola and illy bottle cold coffee and the unique illy blend becomes available "on the go". 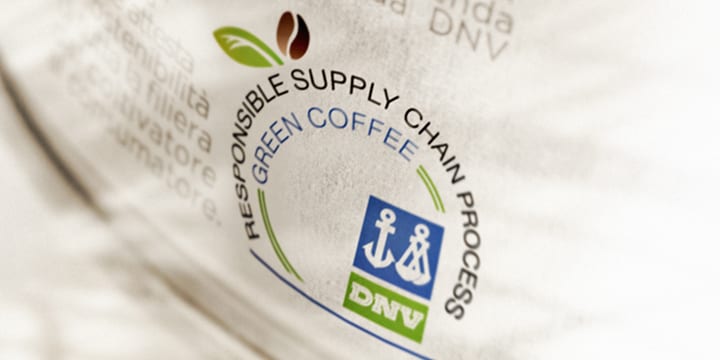 Andrea llly launches the idea of certifying sustainability. Issued by DNV GL, RSCP certification assesses the social, environmental and economic impact on all stakeholders in the chain. 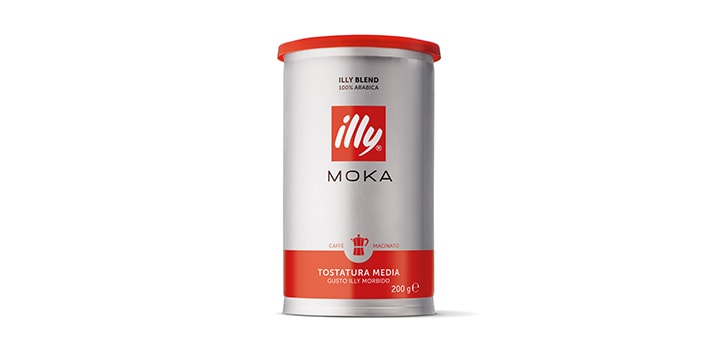 Created in response to the 20-20-20 objectives of the European plan, illy Soft Can is the first home pack made from pressurised flexible material. 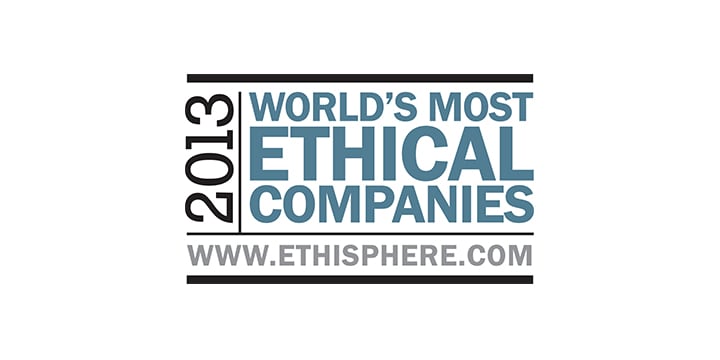 For the first time, illycaffè joins the list of the World's Most Ethical Companies, drawn up annually by Ethisphere Institute.

The largest celebration of coffee in history: illy, an official partner of Expo 2015 and the International Coffee Organization, coordinates a special programme of events and hosts the Coffee Cluster, the coffee pavilion visited by over 13 million people. 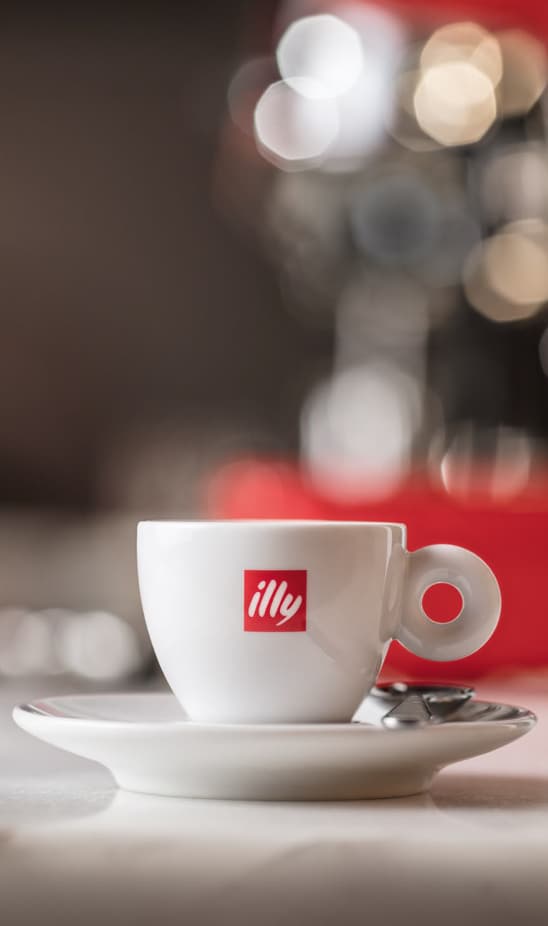 Thank you for signing up to our Newsletter
Now you’ll always be up to date on all new products and promotions.