Trieste, July 4th, 2022 - From the joy of sailing the seas to the vibrancy of a city like Trieste, taking in respect, inclusivity, curiosity, and spontaneity: the values of Barcolana, what it aspires to, and its relationship with the participants are illustrated in a single image that is not merely a poster, but a manifesto of the regatta's values.

“To me, Barcolana represents the joy of dedication and allegiance. I wanted to draw from the regatta's optimism to create a poster that resonates with our human nature and expresses the importance of adding to the world our human touch, our respect, empathy, and spontaneity. My signature on the illy cup I designed thirty years ago bears a simple message: let us leave a positive impression in the world” explains Matteo Thun.

The poster captures and summarizes the spirit with which the Barcolana was born in 1969; the same spirit that has been driving the organizers, Società Velica di Barcola e Grignano, for over 50 years. Matteo Thun has identified the distinctive elements - Barcolana's DNA, as expressed with a fingerprint whose lines recall sea currents - that project this event beyond the world of sailing and illustrates the regatta's universe of values. Ultimately - explains Matteo Thun - Barcolana is the joy of sharing a passion through which we can cultivate shared values.

"It is with great joy that we renew once again our partnership with Barcolana, a unique event with which illycaffè shares deep roots: our people and our territory” says Cristina Scocchia, CEO of illycaffè. “For this 54th edition, we decided to entrust the poster's design to Matteo Thun, who decided to celebrate the regatta's spirit through the metaphor of a fingerprint: as parallel lines flow through it, they sometimes cross one another or break off, creating a design that recalls marine currents and conveys positive emotions while celebrating the importance of interconnectedness. This image highlights how Barcolana, the world's largest sailing regatta, is able to convey to the world shared values, the harmony between man and nature, inclusiveness, empathy, respect, and the joy of life”.

"Matteo Thun's manifesto for the 2022 edition," commented Mitja Gialuz, President of the Società Velica di Barcola e Grignano "is a perfect synthesis of the profound values behind Barcolana. For sailors, currents are independent variables that must be taken into account when tracing a route. When shaping the 54th edition, which comes after two years of pandemic, we are rediscovering precisely those values, from curiosity to vitality, from inclusiveness to respect. After all, the image also evokes an ear and reminds us of the need to listen. Listening to the people of Barcolana who want to go back to fully experiencing the magic of the largest sailing race in the world'.

The Barcolana sailing regatta will take place on October 9th, 2022 in the Gulf of Trieste; start time is 10:30. It will be preceded by a series of events, both ashore and at sea, starting on September 30th. Registration for the regatta begins on June 29th, online at www.barcolana.it. Today, Società Velica di Barcola e Grignano will send out 400 posters and 4,000 postcards featuring the imagery from the official poster; they will be sent to the yacht clubs and shipowners who participated in the previous editions. 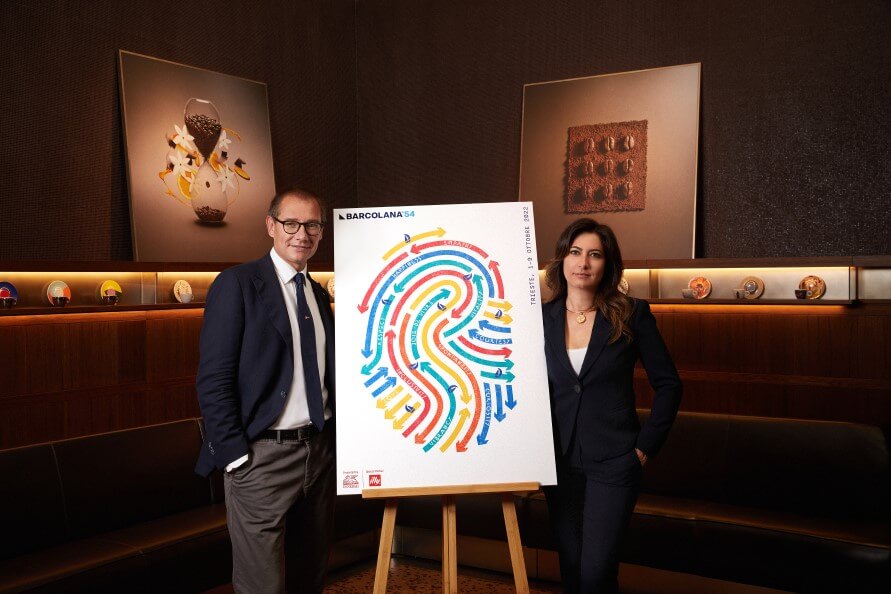 Matteo Thun, architect and designer, was born and raised in the bilingual German and Italian speaking region of South Tyrol, Italy. Following his studies with Oskar Kokoschka and Emilio Vedova at the Salzburg Academy he graduated cum laude with a degree in Architecture from the University in Florence. He co-founded the ‘Memphis’ group in Milan in 1981 with Ettore Sottsass and opened his own studio in Milan in 1984. He established Matteo Thun & Partners in 2001 - the studio’s designs are inspired by timeless simplicity and centred on the human scale. The company is operating internationally in the hospitality, healthcare, residential, offices and retail sectors and product design. Encompassing a team of 70 interdisciplinary architects, interior, product and graphic designers, Matteo Thun works from micro to macro scales with a focus on the management of highly complex projects. The work prioritises aesthetic durability, technological longevity, and the future lifespan of buildings and products. A profound respect for a project’s soul and a sensitive approach to the client’s individuality is key to all of Matteo Thun’s work. Specialising in hospitality, with a particular focus on luxury hotel projects and residences with character, Matteo Thun provides customised and turnkey concepts including architecture, interiors and lighting solutions. Wellbeing, too, is at the core of his design philosophy. This is expressed most clearly in healthcare projects, where the relationship between patients and their physical environment is the primary concern. Matteo Thun’s architecture, interior and product designs is the result of an ongoing dialogue between the clients and its DNA, the location, its residents and its culture.

Barcolana is the world’s largest sailing regatta and is held every year in Trieste on the second Sunday in October. Organized in partnership with the Municipality of Trieste, the Friuli Venezia Giulia regional government, and its main sponsor General, and with the support of numerous partners, the 50th annual regatta, which took place on Sunday, October 14, 2018, saw the participation of 2869 yachts, a new world record for a sailing regatta. The 50th edition brought over 300,000 people to Trieste, underscoring how it is one of the most popular events in Italy, which brings dividends in terms of image. Barcolana was one of the few sporting events to take place in Europe during the Covid pandemic, from 3 to 11 October 2020. In 2021, Covid's second year, the event saw 1650 boats at the starting line and strong Bora winds, which reduced the course and the number of hulls actually at sea: victory went to Arca SGR. The 2022 edition will take place from 30 September to 9 October 2022.

illycaffè is an Italian family-owned company, founded in Trieste in 1933. Its mission has always been to offer the best coffee to the world. Illycaffè produces a unique 100% Arabica blend, combining 9 of the best varieties in the world, selected by illycaffè: every day 8 million cups of illy coffee are served in over 140 countries around the globe, in the cafés, restaurants and hotels, in single-brand cafés and shops, at home and in the office. As a result of its innovations, illycaffè contributes to the coffee technology progress at global level. In 1991, the “Premio Ernesto Illy de qualidade sustentavel do cafè para espresso” was launched in Brazil for quality espresso coffee. Illycaffè has contributed to the sharing of the know-how, paying growers a premium price for the best quality selected by illycaffè. Since 2016, with the “Ernesto Illy International Coffee Award”, the company has celebrated coffee growers all over the world that, according to illy, have produced the best sustainable coffee. Since 2013, the company has been in the list of the World Most Ethical Companies. In 2019, it enhanced its commitment to pursue a sustainable business model integrating the interest of people with the environment, adopting the status of Società Benefit (Benefit Company) and adding this commitment into its own bylaws. In 2021, illycaffè was the first Italian company in the coffee sector to obtain the international certification as B Corp as a result of its commitment to comply with the highest standards of social and environmental performance. The company also founded the University of Coffee, which has the objective of sharing culture at all levels, offering a comprehensive and practical training to growers, baristas and coffee lovers. Everything that is “made in illy” is about beauty and art, the founding principles of the brand, starting from its logo, designed by artist James Rosenquist, up to illy Art Collection cups, decorated by over 120 international artists. In 2021, the company had 1305 employees and a turnover of about €500 million. There are 205 illy single-brand shops in over 40 countries all over the world. In 2021, Rhone Capital became a minority shareholder of illycaffè with the aim of contributing to the company’s international growth plans.