Extended until September 10th in Venice: Robert Wilson’s Exhibition dedicated to the 25th Anniversary of the illy Art Collection

Given the success of the first few months since its inception, the exhibition named “THE DISH RAN AWAY WITH THE SPOON everything you can think of is true” will be extended for another 8 weeks.

Venice, June 2017- With an average attendance of about 800 people per day, Robert Wilson’s exhibition called, “THE DISH RAN AWAY WITH THE SPOON everything you can think of is true”, dedicated to the 25th Anniversary of the illy Art Collection, will be extended until September 10th.

Launched on May 10th in the Magazzini del Sale (The Salt Warehouses) of Venice, in conjunction with the 2017 Venice Biennale, this exhibition celebrates the series of cups that illycaffè - the global leader in the sector of high quality coffee- has been creating with the collaboration of the greatest contemporary international artists since 1992. The strong interest and the remarkably positive public response have inspired illycaffè to extend the exhibition throughout the summer, thus giving the people who had long awaited the Art Biennale in the lagoon and their August summer vacation, the chance to lose themselves in the imaginary world of the brilliant American artist.

It is a journey through seven settings that the multitalented Wilson, winner of the Leone d’Oro Award for Sculpture in 1993, has created, assimilating a great variety of artistic languages with his usual prowess. Dreamlike surroundings offer a great visual and emotional impact, filled with animals present in his poetry since the beginning, which serve as symbols of the ability to listen, the ability to move, and attention to everything that surrounds us.

A Siberian tiger in a forest, straight out of paintings by Hieronymus Bosch; mechanical rabbits in a vintage interior; illuminated wolves and volcanoes, cranes and monkeys in a white garden, an elegant panther and a final surprise, all provide the framework for the “Wunderkammer” dedicated to the celebration of the iconic cups designed by Matteo Thun in 1991 and interpreted over the course of 25 years of illy Art Collection, by artists of the caliber of Marina Abramović, Robert Rauschenberg, Jeff Koons, Julian Schnabel, Anish Kapoor, and Daniel Buren. A vast collection of artistic objects designed for daily use, on which approximately 100 of our greatest creative contemporaries have left the mark of their unique artistry, thus helping to turn the original illy espresso cups into an instantly recognizable symbol of high quality and the love of art.

The deliberately playful title of the exhibition invites visitors into a world of fantasy, typical of Wilson’s way of approaching the creative process, always through the eyes of a child. An enchanted place where anything is possible, exactly as on the small white porcelain canvas of the cups entrusted to the inspiration of the artists who have contributed to the illy Art Collection: “objects which are amusing and playful”- as affirmed by Wilson- “which express the aesthetic diversity of the artists”.

ROBERT WILSON
“THE DISH RAN AWAY WITH THE SPOON. EVERYTHING YOU CAN THINK OF IS TRUE”
Extended until September 10th- daily from 10 am to 6 pm (closed on Mondays)
Address: Magazzini del Sale - Zattere Dorsoduro 262, Venice, Italy 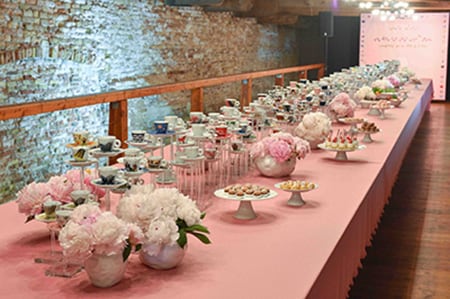