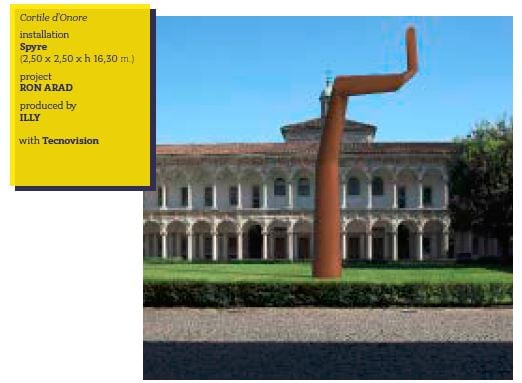 April  3 - While it is usually man that observes the work of art, in the installation Spyre it is the sculpture that observes us, with its digital eye, spying on us, to express a personal vision of the world. Made in collaboration with illy, the work is composed of five tubular parts in Corten, with a video camera at the top to record and project images in real time, like a sort of Big Brother. Spyre is an inanimate being that comes to life and puts constructed space into a new light, staging the surveillance and tracking of people through digital technologies. The installation changes its perspective with respect to the architectural context, while the form suggests free interpretations.

Spyre is a tribute to the materic qualities of Corten steel, and expresses the functional and aesthetic research on raw materials typical of the design of Ron Arad. After London, the installation comes to Milan to launch the collaboration of Ron Arad with illy, for which the designer has created the new cup in the illy Art Collection. With its oxidized texture and color, Spyre reflects the essence of coffee that comes from the grinding of beans without any other treatments

Born in Tel Aviv in 1951, RON ARAD was educated at the Jerusalem Academy of Art and later at the Architectural Association in London. He co-founded with Caroline Thorman the design and production studio One Off in 1981 and later, in 1989, Ron Arad Associates architecture and design practice. In 2002 he received the title of Royal Designer for Industry (RDI) for his aesthetic achievements and the value of his design for the industry. In 2011 he was awarded the London Design Medal and in 2016 the ADI Colden Compass. From 1994 to 1997 he was professor of design at the Hochschule in Wien and until 2009 at the Royal College of Art in London, where he became Professor Emeritus. In 2013 he was elected Royal Academician by the London Royal Academy of Art. His research activity is characterized by his constant experimentation with materials such as steel, aluminium or polyammide and by his radical re-conception of the form and structure of furniture, which has put him at the forefront of contemporary design. He has designed for companies such as Alessi, Cappellini, Cassina, Kartell, Magis, Moroso, Swarovski and Vitra. among his architectures under construction: the Beit Shulamit hospital, Israel (to be completed by 2019); the Onion House; the Totseret Ha’Aretz towers in Tel Aviv (2017). Many personal exhibitions have been dedicated to him worldwide. His pieces of furniture are in the collections of major museums such as the Musée des Arts Décoratifs in Montréal, the Vitra Design Museum in Weil am Rhein, the Musée des Arts Décoratifs in Paris, the MoMA in New York, the Victoria and Albert Museum and the Design Museum in London and the Stedelijk Museum of Modern Art in Amsterdam. He is present in many publications, among which monographs Ron Arad: No Discipline, MoMA, 2009 and Ron Arad by Alexander von Vegesack, Vitra, 1990.

Illycaffè produces and sells globally a unique blend of highest-order coffees, that combines nine distinct pure Arabica coffee types. The balance of these ingredients generates the unmistakable illy taste and aroma, which is always the same, in each cup, wherever you drink it. Established in 1933 by Francesco Illy, the company is now managed by Andrea Illy who has internationalized it, and has innovated its processes, culture and search for quality. President Andrea Illy stated: “The mission of illycaffè is to delight all those who cherish the quality of life through our search for the best coffee that nature can provide, enhanced by the best available technologies. We have been bringing forward my father's and my grandfather's dream for more than 80 years: producing the best coffee in the world”.