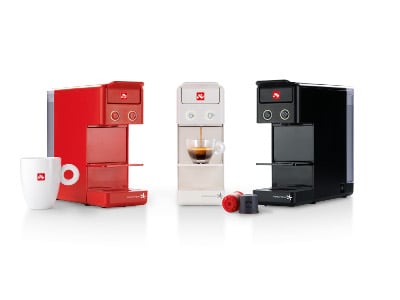 Trieste, April 2017 - illycaffè, the leading global company in the high-quality coffee industry, launches the new Y3, the coffee machine designed by Architect Piero Lissoni, which premiered at the last Salone del Mobile in Milan. A new challenge involving the combination of design and technology in an object for everyday use to introduce a new consumer target group to the taste of the unique illy blend, consisting of nine precious Arabica varieties.

In fact, the new Y3, as Generation Y, has been designed for the Millennials, to which illycaffè and Lissoni have dedicated a compact, easy-to-use machine that perfectly combines aesthetics and practicality. The simple lines of the new Y3 enclose, in a small space, several functions with push buttons, to prepare both espresso and filter coffee, as well as anti-waste technology, which automatically stops dispensing and turns off the machine after a few minutes when it is not being used.

With the new Y3, illycaffè focuses on young and passionate consumers in order to introduce them to the superior quality of its unique blend and to the beauty of its design, i.e. two of the core values of the company which, since its foundation in 1933, strives to produce the best coffee in the world.

From 19 April, the new Y3 will be available in three colours (white, red and black) and will be sold at the illy Caffè in Via Monte Napoleone, 19 and in Piazza Gae Aulenti, 36 in Milan, at the illy Shop at the Rinascente department store in Piazza Duomo in Milan, online on shop.illy.com, priced at €89.